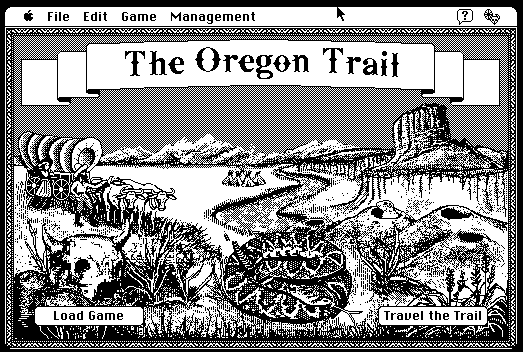 The Oregon Trail is a computer game originally developed by Don Rawitsch, Bill Heinemann, and Paul Dillenberger in 1971 and produced by the Minnesota Educational Computing Consortium (MECC) in 1974. The original game was designed to teach school children about the realities of 19th century pioneer life on the Oregon Trail. The player assumes the role of a wagon leader guiding his or her party of settlers from Independence, Missouri, to Oregon's Willamette Valley on the Oregon Trail via a covered wagon in 1848.

The game is the first entry in the Oregon Trail series, and has since been released in many editions by various developers and publishers who have acquired rights to it, as well as inspiring a number of spinoffs (such as The Yukon Trail and The Amazon Trail) and the parody The Organ Trail.

The Oregon Trail was extremely successful, selling over 65 million copies,[1] after ten iterations over forty years.[2] It was included in the book 1001 Video Games You Must Play Before You Die.[3] It was a hallmark in elementary schools worldwide from the mid-1980s to mid-2000s, as school computers came bundled with the game. In 2016, The Oregon Trail was inducted into the World Video Game Hall of Fame.[4]

Reviewer: ForOldHack - favoritefavoritefavorite - May 22, 2020
Subject: Classic Game... was good,
This was a really good game, until I decided to try and get a high score. Unlimited score:

When I found this, I set all the high scores in a lab to 100,000, name 'The Cook'
Reviewer: Ripcord - - February 14, 2018
Subject: File not loading
The WA SM binary file isn't loading, making this game unplayable. Will check back. (Feb. 14, 2018)
Reviewer: maximumBandwidth - favoritefavoritefavoritefavoritefavorite - December 26, 2017
Subject: Fun Retro Game
I'm glad I was able to finally play The Oregon Trail, I never had it growing up. I made it to the Willamette Valley on my first try, but it was challenging enough to be entertaining. Perhaps the other reviewer died of dysentery?
Reviewer: gahahah - - November 29, 2017
Subject: ass
this game is straight ass